Jim Thompson, Digital Developer at Fuel Integrated, shares why his Grandmother is an inspiration. 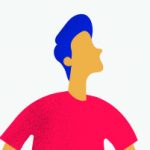 My grandmother has always been an inspiration to me.

As part of the generation who stood against fascism in Europe, like many other families she suffered the loss of her brother over in the fields of Europe.

A member of the land girls (Women’s land army), she was passionate about the work she carried out for her Country, and when the British Government finally recognised these efforts in 2008 she received a special veterans badge, some 60 years too late.

After losing her husband she was left as a single mother bringing up her 4 young children, alongside caring for her elderly parents.

"She always had time to love and care for her family, friends and neighbours. She always made time for people."

We lost our grandmother in 2016, and she has left an indelible mark on her numerous children, grandchildren and great-grandchildren.

She taught me to “always make time for people”.

We want to know who Inspires you. Join the conversation.

Jim Thompson is a Digital Developer at Fuel Integrated.