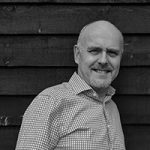 I first saw Lee Brilleaux in action on stage. Then occasionally in a nearby corner shops. But more often than not nipping-in-and-out of his local the Admiral Jellicoe on Canvey Island, where I grew up - when he wasn’t on the road touring.

He cast an enigmatic image. First in flares and then in drain pipes, as his band Dr Feelgood navigated their way through the mid-seventies and into the eighties with their uncompromising brand of rhythm and blues. How could someone like Lee be such a steely-eyed high-octane force-of-nature on stage, and yet be so politely mannered and genial when out and about picking up groceries?

While my parents were great friends with Lee and his wife Shirley, I never got to meet him in person. Like so many musicians and bands at the time, Lee’s work ethic both staggered and inspired me, and still does to this day 26 years after his death in the mid 90s. When I’m working late in the agency or at home, I always think – well Lee would be stepping on stage right now – which then spurs me on into the wee hours.

While success came quickly to him and his band mates: Wilko Johnson (who left and was replaced by Gypie Mayo), John Sparkes and John Martin, Lee it would seem, always remained gracious, grounded, good-humoured and repeatedly “cut-to-the-chase” to connect intimately with his audience or simply those around him. Mr “Rock-n-Roll Big Shot” he was not. He knew where he was from, and sought to help others reaching for the success he had had. When approached by friend Jake Riviera seeking funds to start a new record label, Lee immediately wrote out a decent sized cheque on the spot. That new label grew into a platform that launched the careers of acts like Nick Lowe, the Damned, Lene Lovich, Wreckless Eric, Elvis Costello, Ian Dury, Madness, Devo, Motorhead and the Pogues.

Lee’s approach to life, his work, music, his friends and family over the years – to this very day continues to inspire me. Who’s Inspired You? Let us know…

Steve Tolton is the Managing and Executive Creative Director at Fuel Integrated.